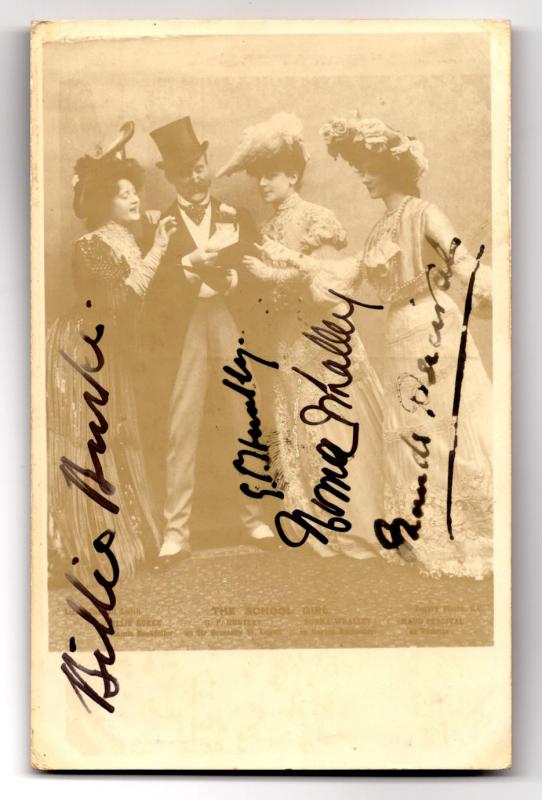 American character actress, the daughter of a circus clown*, often playing the part of a dithery, empty-headed but endearing woman. She was married to Florenz Ziegfeld.

Burke was immortalised as Glinda , the Good Fairy, in the classic The Wizard of Oz (1939).

This is an extremely rare vintage sepia Rotary postcard showing the 18 year-old Billie Burke with three other cast members in her very first stage production in May of 1903 - The  School Girl, a hit musical produced by the great Charles Frohman at the Prince of Wales Theatre in London. Burke played a bubbly American girl called Mamie Reckfeller and, according to a review in the New York Times of May 10th 1903, "Miss Burke was the hit of the Evening". The postcard has been boldly signed in dark blue ink by Billie Burke and by G.P. Huntley, Norma Whalley and Maude Percival. The sepia of the postcard is a little faded but overall condition is good.

* Although Billie Burke was born in America, her father was English - a clown who worked for the Barnum and Bailey Circus. He moved the family to England to start a troupe of clowns on his own, so his daughter was brought up and schooled in Europe (accounting for her odd accent - a mixture of English and American). Billie was immersed in show business from her earliest years and made her debut, not as an actress but as a singer, in 1902 at the London Pavilion Music Hall .

**Charles Frohman's next production, which premiered on the 27th December 1904  at the Duke of York's Theatre was the immortal Peter Pan.