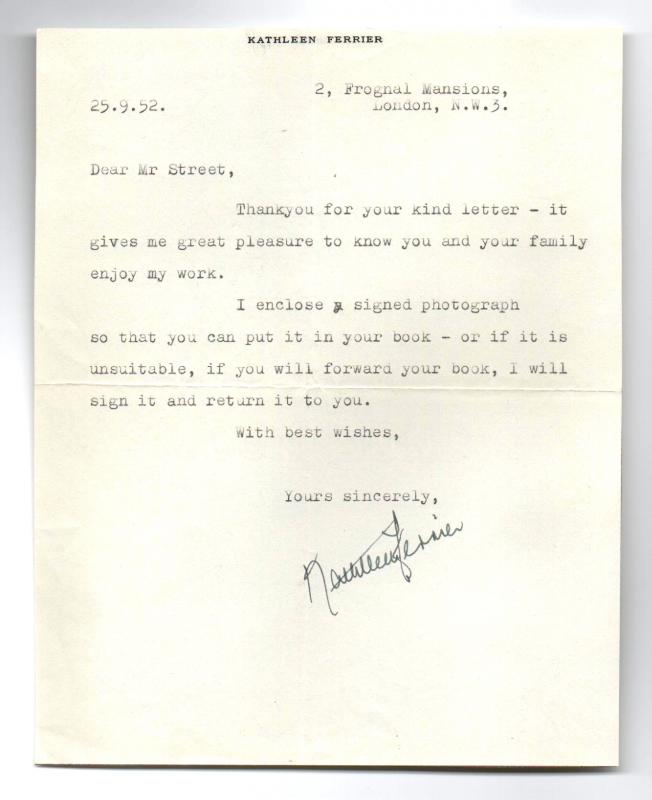 Great English contralto singer who achieved an international reputation as a stage, concert and recording artist, with a repertoire extending from folksong and popular ballads to the classical works of Bach, Brahms, Mahler and Elgar.

Ferrier’s death from cancer, at the height of her fame, was a shock to the musical world and particularly to the general public, which was kept in ignorance of the nature of her illness until after her death. She was especially known in Britain for her unaccompanied recording of the Northumbrian folk tune Blow the Wind Southerly, which was played regularly on BBC Radio for many years after her death.

This is a listing of TWO rare Farrier items. The first is a letter, typed on a 7.75" x 6" sheet of headed notepaper (2 Frognal Mansions, London N.W.3.  25.9.52). Ferrier thanks a fan for a kind letter ("it gives me great pleasure to know you and your family enjoy my work"), encloses a signed photograph and offers to sign a book if this is "unsuitable". There's an excellent ink signature at the conclusion of the letter.

The second item is the photograph itself - a very pretty Austrian postcard, signed and inscribed ("For John Street, with best wishes. Kathleen Ferrier."

Condition of both items is excellent.