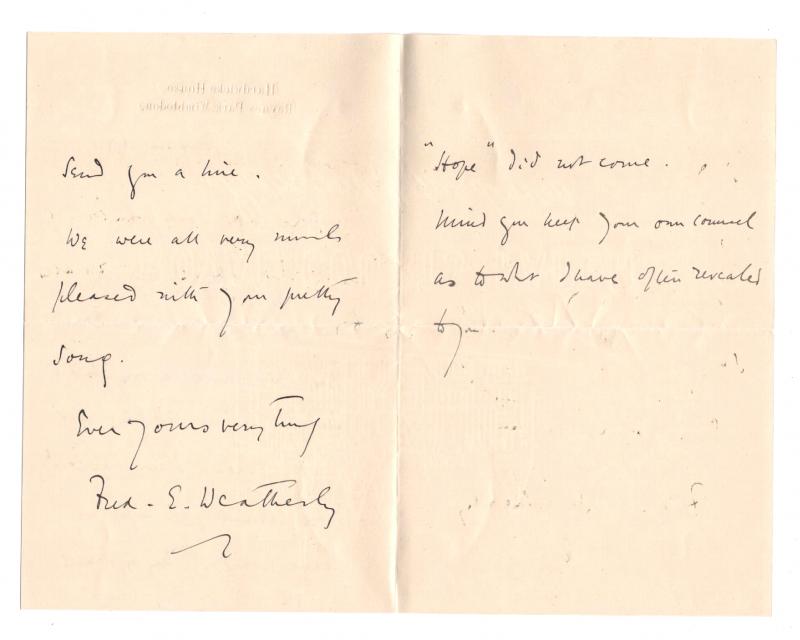 English songwriter, a barrister by profession.

Weatherly was hugely prolific, a one-man song factory, producing literally thousands of works over his lifetime. His most commercially successful ballad was Roses of Picardy, to the music of Haydn Wood, which became one of the great popular songs of the Great War and made him a small fortune.

Weatherly was, however, immortalised by another song. In 1910 he wrote the words and music for an unsuccessful song he called Danny Boy. In 1912 his sister-in-law in America sent him a traditional tune called the Londonderry Air, which he had never heard before.

(The first appearance of the tune in print occurred in 1855, in Ancient Music of Ireland, published by the early collector George Petrie (1789-1866). The untitled melody, was supplied to Petrie by Miss Jane Ross of Limavady, County Londonderry, who claimed to have taken it down from the playing of an itinerant piper, Blind Jimmy McCurry. This is the origin of the Londonderry Air name.)

Weatherly immediately noticed that the melody was perfectly fitted to his Danny Boy lyrics, and published a revised version of the song in 1913.

It became the greatest of all Irish songs. As far as is known, Weatherly never set foot in Ireland.

Oh Danny boy, the pipes, the pipes are calling
From glen to glen, and down the mountain side
The summer's gone, and all the flowers are dying
'Tis you, 'tis you must go and I must bide.
But come ye back when summer's in the meadow
Or when the valley's hushed and white with snow
'Tis I'll be here in sunshine or in shadow
Oh Danny boy, oh Danny boy, I love you so.

My wife has no 'At home' Days at present but we shall be very glad to see you & your mother next week, when I am back from circuit & before we leave home. My wife will send you a line.

We were all very much pleased by your pretty song.

"Hope" did not come.

Mind you keep your own counsel as to what I have often revealed to you.